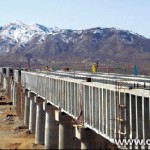 In BBC4′s fantastic documentary Supersized Earth we are taken on a journey around the world to see how humanity is transforming the planet. Episode 3 featured, amongst other things, the world’s largest cattle ranches (Brazil), the world’s biggest opencast mine (USA), and the construction of the earth’s largest man-made river (China). The Chinese are building a 700 mile aqueduct from the South to the North, with each 45m long concrete section, built on site, falling exactly 1cm from end to end.

According to the Telegraph this is one of the world’s five largest engineering projects. Yet strangely it has barely featured in the British media.

And while ordinary bloggers wrote enthusiastically about this inspiring documentary, newspaper reviewers were less excited.

TV critic at the Metro Keith Watson was the most vitriolic, claiming the documentary ‘insulted the viewers intelligence’ because it didn’t mention the problems caused by humans, only the way humans have invented solutions. Startlingly Watson accused the doc of ‘lacking an agenda other than pulling off crazy stunts’. Writing in the Guardian Tim Dowling commented that ‘there is virtually no moral dimension to this tribute to the man-made’.

The lack of a ‘moral dimension’ also puzzled other critics, who seemed lost without one. The Independent’s Tom Sutcliffe was ‘slightly at a loss to describe what Supersized Earth is about. Engineering?Social change?An opportunity to make Campbell do thrillingly ghastly things?’ Andrew Anthony in the Observer complained that ‘you constantly had to remind yourself what it was about’.

‘It’s probably best if you don’t try to pull out a coherent thread’, Sutcliffe concluded, ‘and just treat it as the television equivalent of a flick through the technology section of the Guinness World Records’. For Anthony it was ‘the documentary as hyperactive panic attack. It left you feeling exhausted’.

Its as if they couldn’t appreciate that man’s mastery of his environment has been an achievement, instead of a problem.  ‘Carrying on as if all the ecological challenges facing Earth didn’t exist – many of which can be laid at the door at the rampant urbanisation that has stripped us of many natural resources’ complained Watson in the Metro.

‘The viewer isn’t required to fret about the population density of Hong Kong’, an astonished Tim Dowling reflected. ’Even colossal man-made problems are portrayed as man-made solutions-in-waiting’. A massive sewerage problem under Mexico City? ‘Don’t worry – they’re building a 62km-long sewer pipe – at 7m in diameter, the world’s biggest’.

Perhaps expressions of confidence in progress through technology, without anxious worrying about risks and unequal benefits, simply goes against the grain of British culture. It seems ‘don’t worry’ is the last thing some people want to hear.

The 25 year old Chinese crane driver responsible for lifting the concrete aqueduct sections into position had a different outlook. ‘I never thought that I could participate in such a big project.  Because what I normally do is the small things’, she told the camera, grinning from ear to ear. ‘To lift such heavy loads, from my point of view I feel… I feel very …. honoured, yeah, honoured‘.

Dan Clayton powered by WordPress and The Clear Line Theme